I’ve been thinking about doing a Devlog for a long time now but I’ve never found the time for it. However, I’ve got too many things to say to you! In this first Devlog, I’m going to talk about all the things I did in the last 3 months, especially about the demo and the Haunted Mine… And there’s so much stuff! So here we go!

Firstly, I changed the name of the game. Pumpkin Jack is much better than Curse of the Scarecrow while also fitting the story and the character of Jack in a more coherent way. Here’s the official logo I’ve designed based on the previous one, which I already liked a lot! 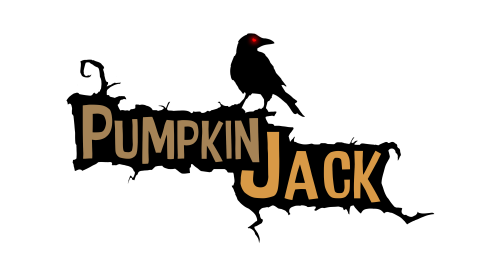 I have created a brand new website to go along with the new name! It is now easier to navigate and understand what is Pumpkin Jack, its story, its gameplay and its characters.
Do not hesitate to take a look and tell me what I can do to make it even better!

I’ve also released the first trailer for the game and people loooooved it! You can check it out right here to see in one minute what the game and the gameplay looks like (and it’s only a small part of it!):

The trailer is not the only thing that was released at that time… Indeed, the first and only demo of Pumpkin Jack is already playable! The demo is a ~15 minutes gameplay of the first level of the game, so you’ll be able to play around with the main mechanics of the game and discover what happened to the Boredom Kingdom… So prepare to get spooked and download the demo right now! I’ve also written a storyboard and prepared a cinematic with voice-over that you’ll be able to enjoy 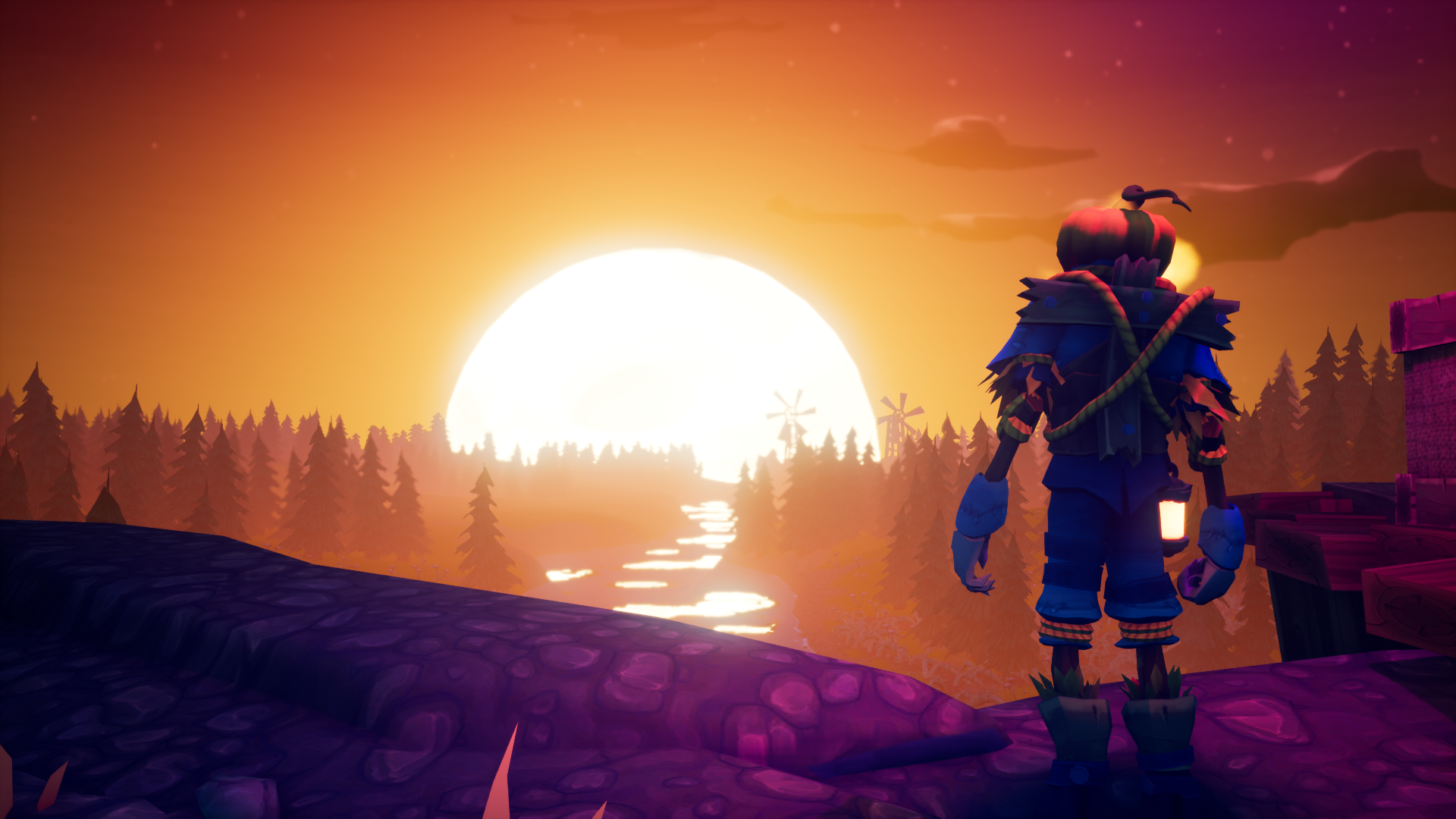 I’ve designed a brand new and interactive main menu for the game! This is what you will see first when you launch the demo. As a video is way more explanatory than a long story, here’s a video!

The keybinding is now dynamic and there is a better display of the keyboard keys in-game. The menu is also navigable with a keyboard/mouse and a gamepad.

There’s nothing more frustrating than falling off a platform because the character couldn’t reach those 3 missing pixels. This is why Jack now automatically grabs platforms when he’s close enough. This feature may look anecdotic, but it’s very important and it gives a much better feeling when Jack jumps around.

MINECARTS! RAILS! RIDES! There’s no Mine if there’s no minecarts. This is why Jack will wander around the Haunted Mine thanks to minecarts, allowing him to reach the top of the hill! The minecart gameplay will be recurrent in the Mine, so get your driving license as soon as possible!

The fork is the first weapon Jack encounters on his journey. For the first level, I needed a simple and common weapon that anyone could come across on his countryside trip. However, Jack did not take the fork to harvest some vegetables… He’s here to wipe out anyone who tries to get in his way!

The basic attack consists of a 4-hit combo, and the special attack is a jump slam, doing AOE damages on the ground.

Since Jack acquires a new weapon every level, I needed to think about a second weapon to give him after the fork. What’s better than a shovel to crush the skulls of angry skeletons? Well, a lot of things… But the shovel allows Jack to turn into a decapitating helicopter! AH! I don’t think Jack enemies will laugh anymore now.

However, I still have to think about a special attack for this shovel so if you have any idea, do not hesitate to tell me!

Now that we know that Jack is not fooling around with his foes, I needed to give him a sword as stunning as himself. So I created an “astonishing, exceptional, incredible” (in its own words…) magical sword that talks. But don’t be fooled. Actually, this is just a sarcastic sword talking crap all day. Still, you can use it as a cutting board to slice your cheese…

While fighting, the sword allows Jack to strike with a 3-hit combo. The special attack is a jump attack summoning ethereal swords from the sky and dealing damages in a zone around Jack. 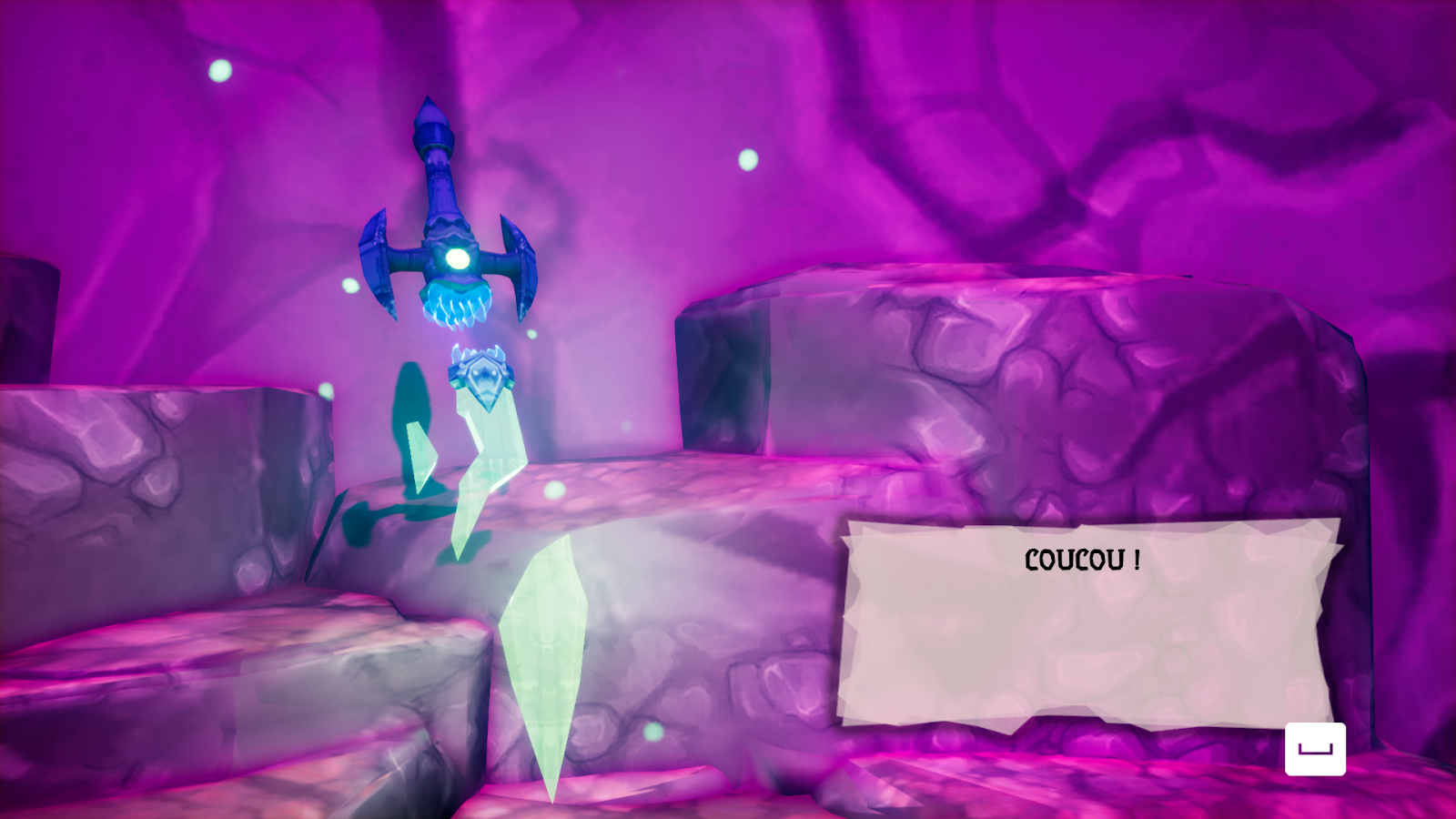 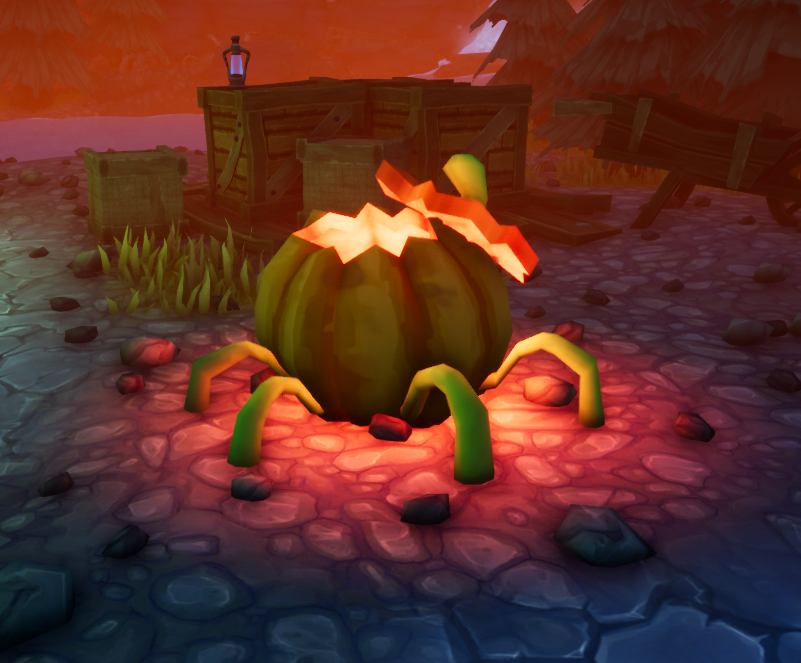 The Pumpkin Mortar is a pumpkin, acting like… a mortar. Quite simple really. You’ll encounter this evil vegetable in the demo so I’m not going to tell you more about it. See for yourself!

However, you can check out the timelapse I made if you want to spoil yourself and see some behind-the-scenes footage. 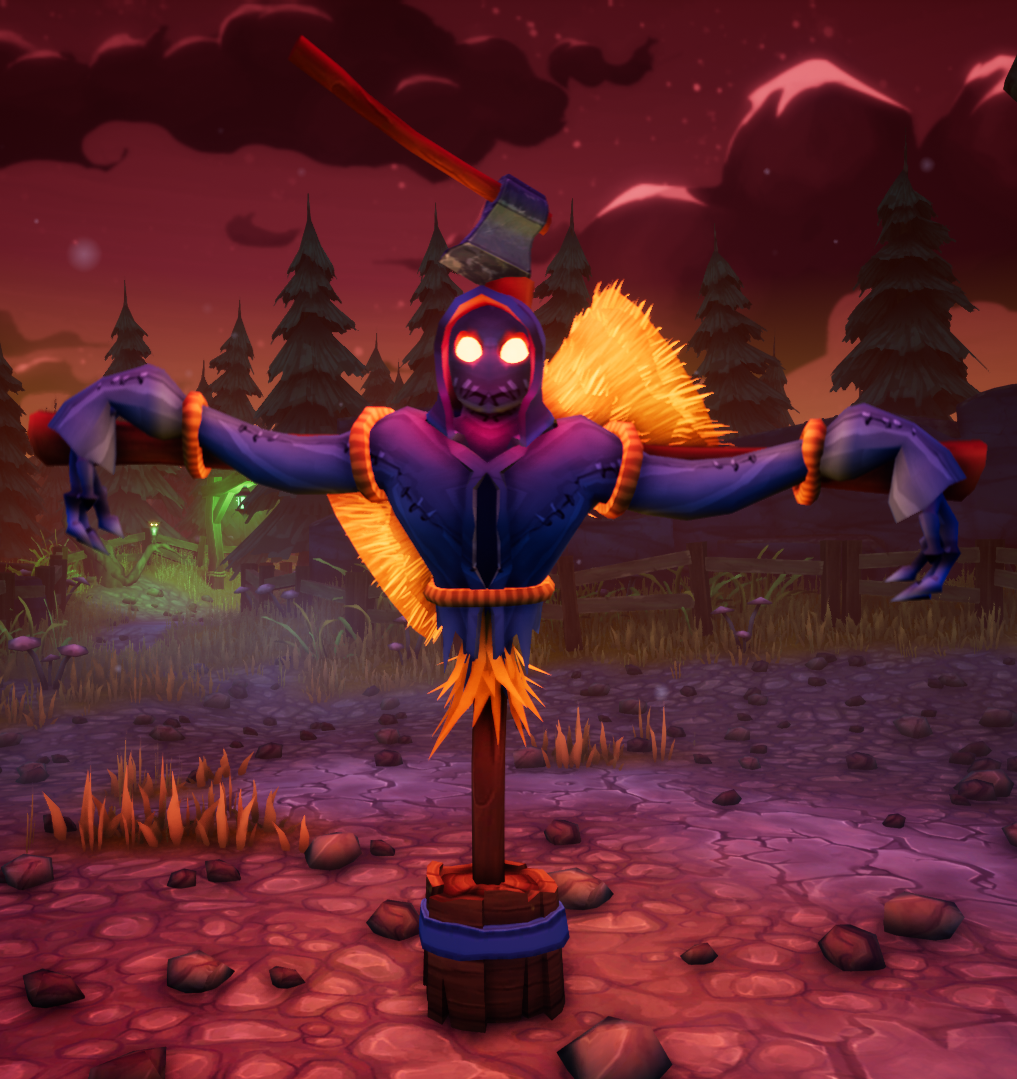 The Flying Scarecrow is the mini-boss of the demo. Although he cannot move at all, he can fly. It is for you to decide which is better, but since he’s angry and will attack you as soon as you’re getting close, you won’t have a lot of time to think about his sad life.

As for the Pumpkin Mortar, you can check out the timelapse I made, from start to finish!

I know, you’re actually saying “What are those crappy mobs? I want something impressive! I want a BOSS!”. Calm down, I’m here to serve you and I’m going to deliver. Be ready to welcome Knight Gasper!

Gasper was a famous knight back in the day, wandering through the realm seeking for fame and wealth. However, he one day suffered a tragic but stupid death (I won’t tell you, I know you dislike spoilers), and would have won a Darwin award for this in our modern era. He now haunts the Mine, waiting to take revenge on his old compatriot Jack, who couldn’t care less about his tragic faith.

Like every boss in Pumpkin Jack, this Boss fight consists of 3 phases BUT plot twist, with an introduction sequence!

Even though I know that seeing how monsters look like in the game is interesting and important, I also believe that watching the birth of those said monsters is useful too!

For the Haunted Mine, I thought about which monsters Jack could encounter and drew some sketches to decide. With the help of the community which is really active and committed on Discord, I managed to find 3 designs for the Mine mobs! But it was not that easy and we had to try multiple things… 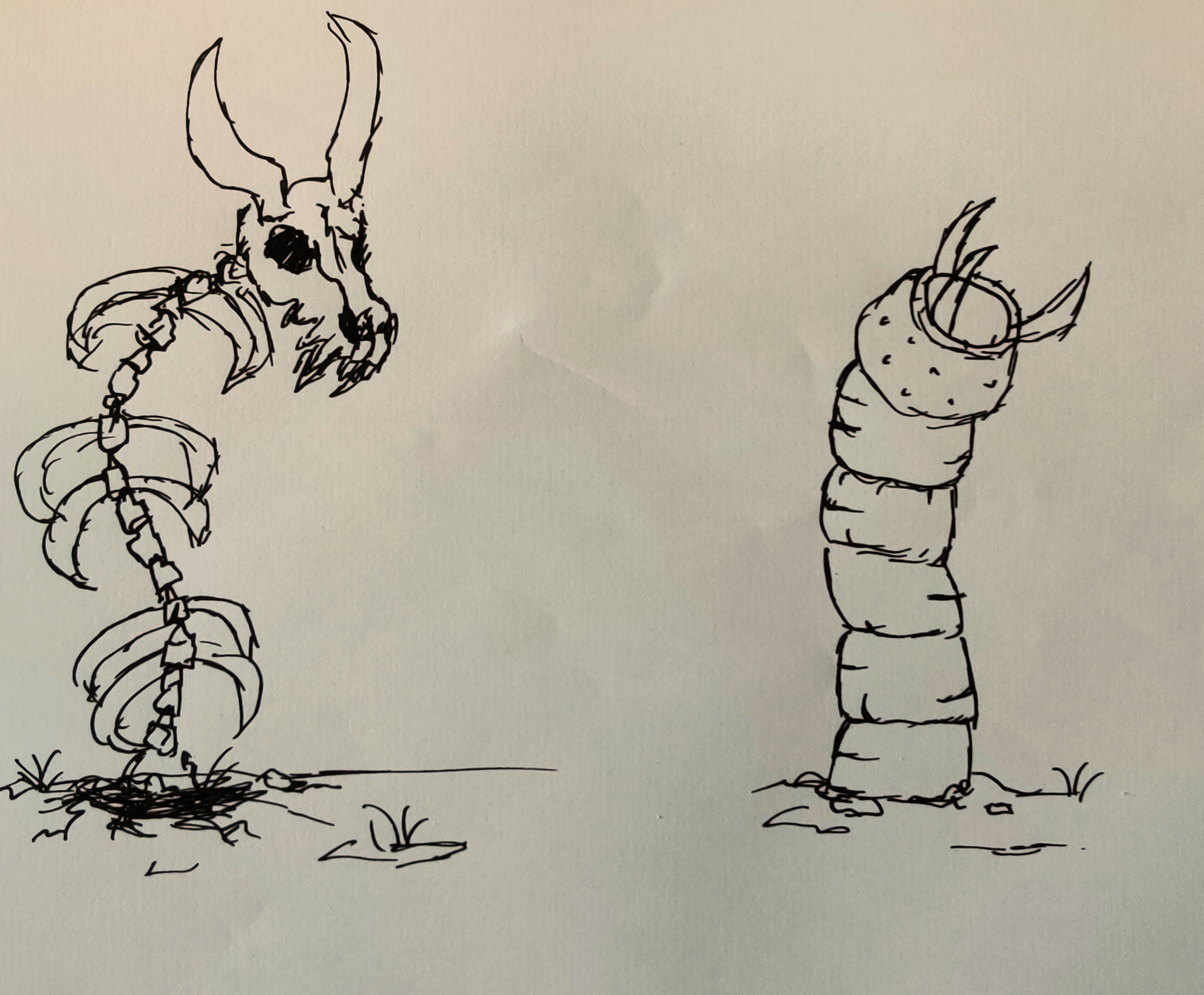 An undead kind of dragon and a big-mouthed worm… Didn’t fit really well the universe.

I wanted a bat but couldn’t find a design that I liked. It was either too cartoonish or too scary, two things that I don’t like. Those are 3 designs that I tried but that I ditched out, even though I hesitated quite some time about the 3rd one.

Finally figured out the right design for the bat. Instead of focusing on the spooky aspect, I focused on the crazy. And it worked. This bat is not only disgusting because its sweating pools of poison, but also because the only way it found to defend itself is vomiting on its enemies…

Modeled, textured and animated! For once, I think I managed to stay true to the concept art. Is it crazy enough? 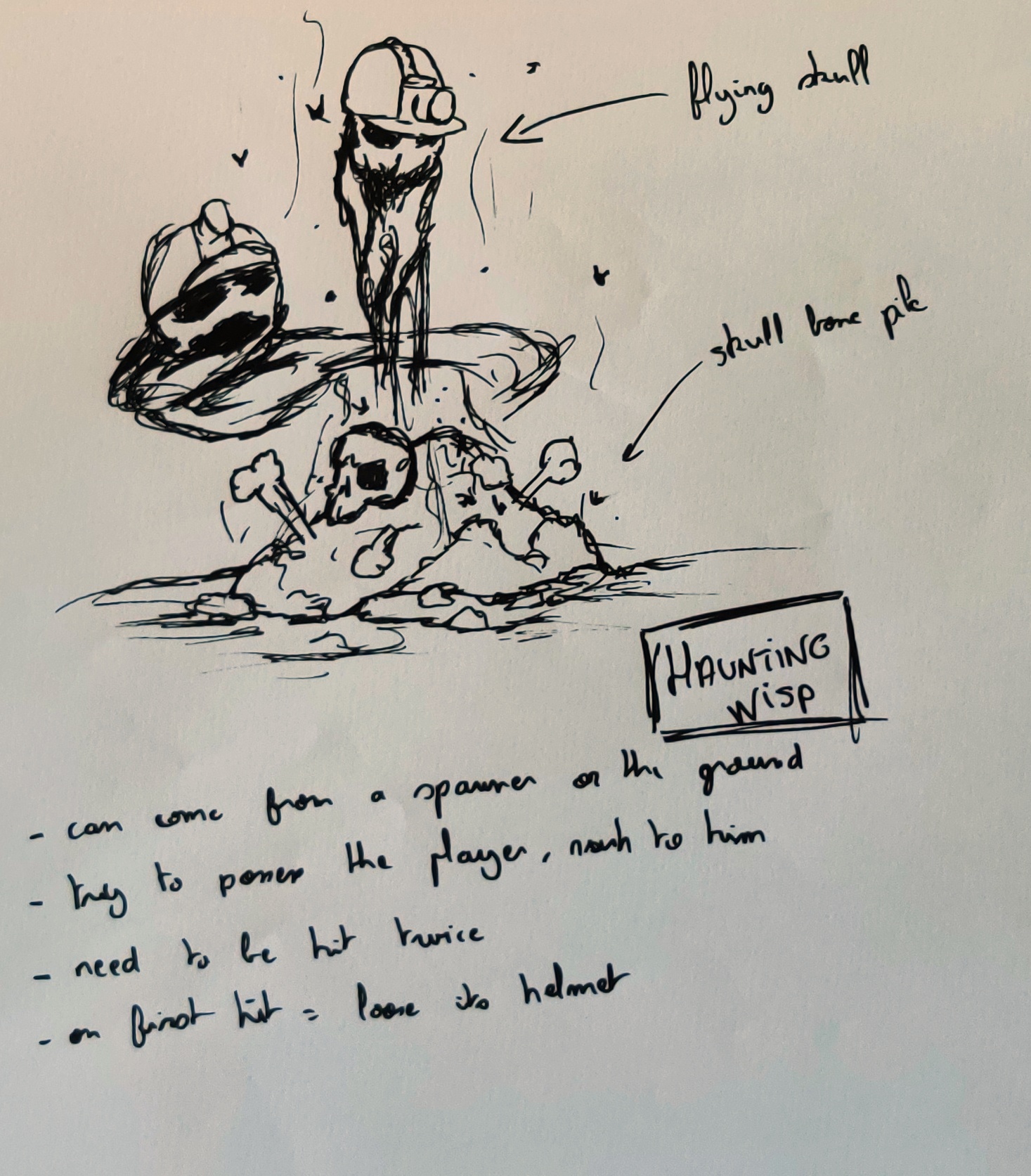 I wanted a monster that would not only spawn, but also respawn! Those wisps are summoned by a skull bone pile, and will keep on coming until you destroy their home. It’s sad, but since they’re supposed to be already dead, do not blame yourself. 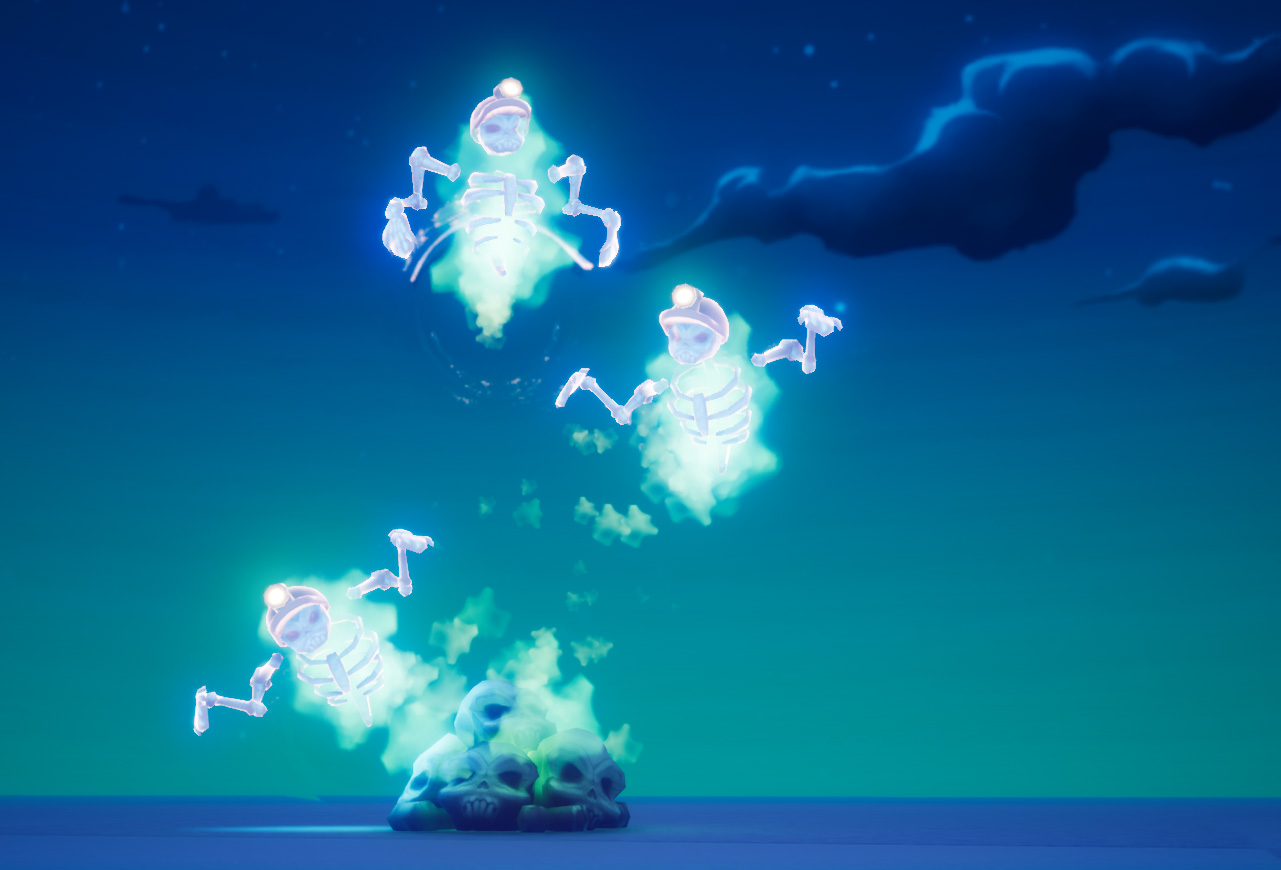 While modeling, I noted that just a skull wasn’t enough and we couldn’t see clearly what the monster was. Hence, I decided that those dead miners could keep their rib cages and arms. I guess they’re not happy with that, because as soon as you approach them, they will charge you and try to kill you. 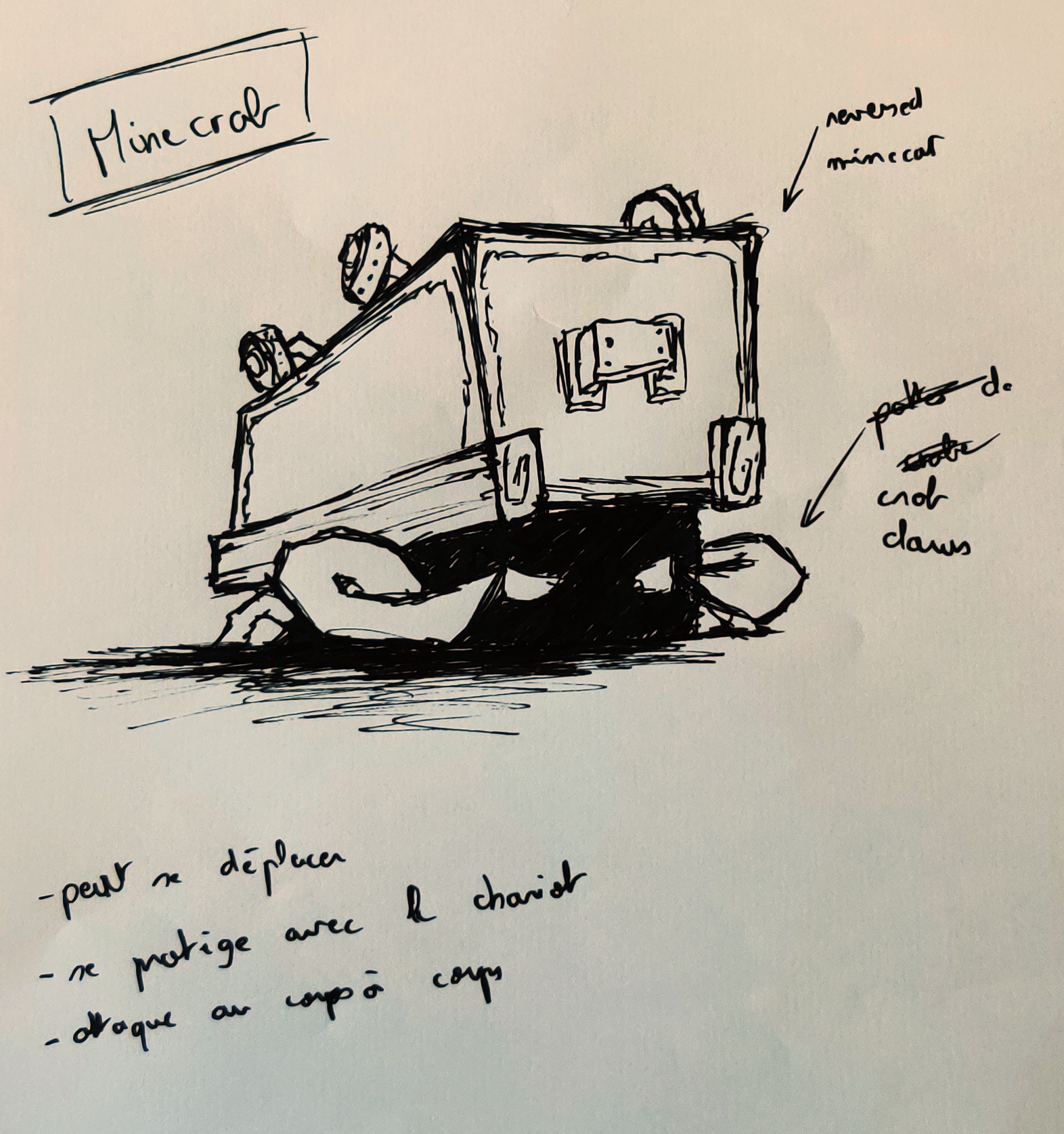 The crabs were living a catastrophic life in the realm, being weak and vulnerable. They’ve found shelter in the Haunted Mine, where the Holy Grail was awaiting for them. A Minecart. Since then, they are fearless monsters, carrying on their back a minecart to protect them. At least that’s what they think… 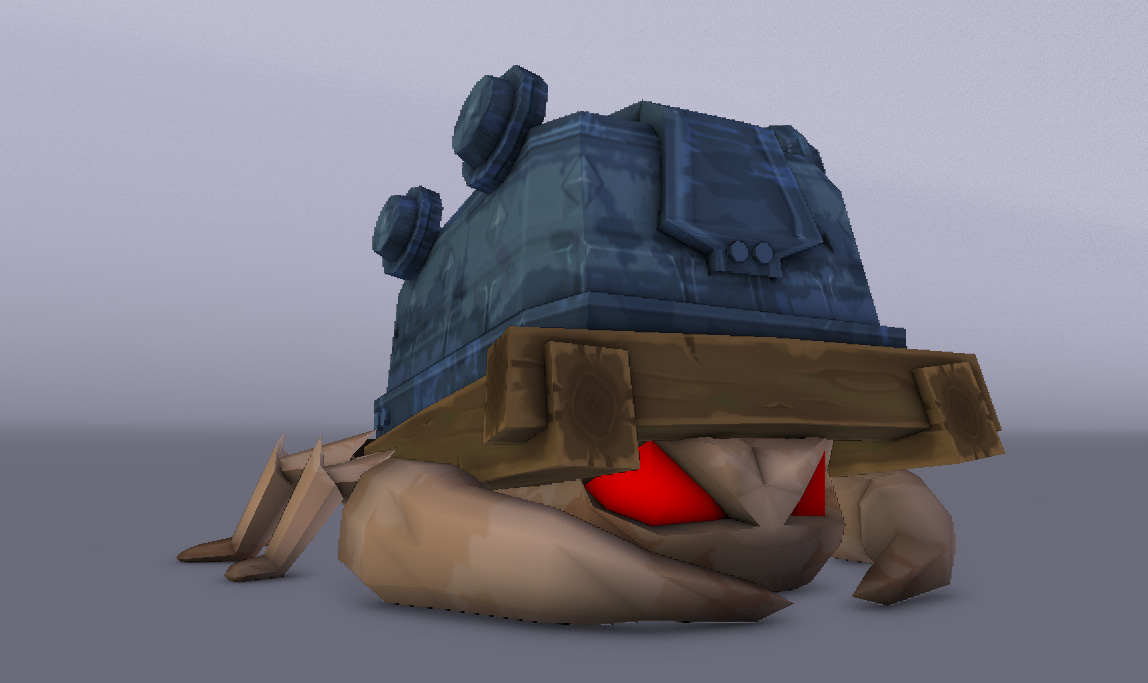 Minecrabs were planning their revenge for so long that their sweet, blue eyes turned red. The red of wrath and pure evil. The thing that they didn’t expect in their naughty revenge plan is Jack coming to their home and shoveling them to death. Woopsy!

This is the end of Devlog #1. If you have stayed here and read everything, thank you so much!

Two years ago, I couldn’t find any 3D Platformer that I liked, and I couldn’t find anything Halloween-related that I enjoyed. This is why I started working on my own game, Pumpkin Jack, and learnt everything from there. I am not going to stop now, as I have so much more things to discover and learn, besides finishing the game.